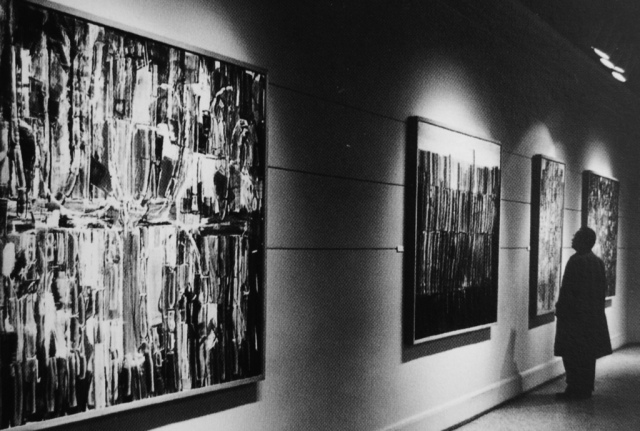 Preliminary design of the catalogue was done by Sr. Aloisio Magalhães, and Mr. Rob Roy Kelly acted as consulting designer for Walker Art Center. The catalogue was printed by the Falcon Press.

In the United States the image of Brazilian art remains as vague as our current notions of that huge country’s social and political conditions. We know infinitely more about historical and recent cultural manifestations of Europe or Asia and at mention of the art of South America, we have difficulty visualizing beyond the magnificent pre-Columbian architecture, pottery, weaving, and sculpture of Peru, Colombia, Ecuador, or Bolivia. Although we have some general acquaintance with the development of colonial baroque architecture, carving, and painting, our knowledge of subsequent Latin American art is certainly inadequate. Now two splendid achievements — Brasilia and the São Paulo Bienal, adventurous projects in modern art and architecture, have made the world aware of Brazil’s enormous creative potential. Brasilia is the key element of an audacious plan to develop the unpopulated hinterlands by centering a new capital within the inland region. Still being built, this six year old synthetic city marshaled the country’s economic and aesthetic resources to give appropriately dramatic form to a long- cherished, ambitious concept. By no means are Brazilians themselves agreed as to the timeliness or practicality of this spectacular venture. Although the new capital is a topic for acrimonious debate, few of its voluble critics question the city’s physical appearance or challenge the revolutionary planning and building design by Lucio Costa and Oscar Niemeyer. After all, architecture has been that country’s outstanding creative expression since Le Corbusier was invited in 1936 to collaborate with a group of young Brazilians in the design of the famous Ministry of Education building in Rio de Janeiro.

This new architecture which has transformed the cities of Brazil utilizes the advances of international architecture in general, but retains a strong regional accent. Proud and flamboyant, its sculptural forms reflect and are modeled in the brilliant southern light. Every two years since 1951 for the brief period of three months, the Bienal de São Paulo makes Brazil the mecca of world art. In scope and quality this event rivals the Venice Biennale, with which it alternates in presenting vast panoramas of painting, sculpture, architecture, theatre, and related arts. São Paulo has a distinguished role in the development of Brazilian modern art. Three major Saloes de Maio were held there from 1937 to 1939. The chief organizer of these exhibitions was Quirino da Silva, a painter and writer. He was assisted by a number of other artists and writers including the distinguished São Paulo art critic Geraldo Ferraz. Their aim was to open “new horizons of plastic expression, assimilating and reproducing the meaning of the history of art of our time, in its technical progress and in its sentimental, ideological, and poetic contents.” These salons became progressively more international; the 1938 exhibit included Ben Nicholson and a number of other English painters; in 1939, the last Salao de Maio, the foreign artists included Albers, Calder, Helion, and Magnelli.

At the same time, the most interesting directions I found were hardly what one could call purely Brazilian. Quite the contrary. The young Brazilian painter has identified himself with the internationalism which swamps him in each Bienal, and the painter of picturesque themes and plantation pastorales now seems anachronistic. Ages of the fourteen artists represented in this exhibition range from twenty-eight to fifty, but the majority are in their thirties. All are of the generation that won recognition for its work in the 1950’s.

Nine are native Brazilians, two were born in Italy, two in Poland, and one in Japan. All are currently working in Brazil except Krajcberg and Piza, who are in Paris. Many have studied abroad and have traveled in either Europe, the United States, or both. All have received international recognition by participation in exhibitions shown abroad— Europe, the United States, Japan.

As a group these pictures are organic in conception; their forms and surfaces, whether spontaneously conceived or laboriously developed, appear to be in a state of flux rather than in one of finality. There is a proclivity for lyrical, opulently worked surfaces, and form is often a secondary consideration. All this is stylistically related to “Latin European” painting, quite natural since Brazil’s cultural orientation is almost wholly European, and her young artists, as a rule, choose to study in French, Spanish, and Italian ateliers.

The mood— the passive intensity— of his paintings is Spanish; these are especially sombre, richly painted, dark abstractions that repeat an austere vocabulary of forms. These canvases subtly juxtapose roughly defined rectangles and  triangles, but his art can hardly be termed geometric. His static images, in their heavily layered surfaces and thick impasto, evidence painstaking evolution. For Camargo, subject matter is incidental, and he states, “My demands are purely formal. I have no a priori intentions whenever a painting satisfies me formally, I can verify that it is also expression. The painting of Manabu Mabe is more spontaneous and varied. Like Camargo, he has an important reputation in Brazil. But his pictures are far more open, even explosive. He is essentially a ‘School of Paris’ painter, and his work is a confluence of “tachisme” and native Japanese calligraphic forms. Mabe has great style and facility, and his paintings have a wide range of images, all instantly evocative of Oriental writing. Unlike Camargo, Mabe is a tremendously prolific artist. His innate, infallible sense of color seems never to desert him. The danger is that his painting occasionally borders on the purely decorative, and its force is thus dissipated. Yet he is surely an accomplished artist, and it will be interesting to observe how Mabe, like other Japanese painters who work in Western idioms, will grow. His pictures would have been perfectly at home in the Japanese section of the São Paulo Bienal alongside those of Hisao Domoto and Yoshishige Saito who also have skillfully fused ancient Oriental with modern Western visual concepts.

Aloisio Magalhães believes that the Brazilian artist must utilize external influences while continuing to express his native environment. Magalhães’ pictures have their origin in the tropical countryside of Pernambuco, his native state. He refers to his brilliantly colored paintings as landscapes, subjective interpretations of that area’s luxuriante growth. Technically, the artist intensifies their colour by using a printer’s extender and never uses an opaque white to lighten a tone. Thus, the highly glazed, luminous surfaces of his pictures express the violent contrast of light, humidity, and exuberant vegetation of the sugar plantation.

Until recently, Ivan Serpa was considered an exponent of a rigid Brazilian style called “concrete” painting. This movement and its offshoot, “neo-concrete” art, are reminiscent of de Stijl and Bauhaus art in general; Max Bill’s work and philosophy, rooted as it is in these early twentieth century European developments, has surely exerted great influence on certain artists. However, Serpa’s pictures in this exhibition are exactly opposite in spirit and must be considered a repudiation of “concrete” painting. Like finely sliced  tree root sections, their images are complex. The lean surfaces of his canvases are achieved more by staining than brushing, and there is a controlled use of small incidental paint effects in these highly rarefied Works.

The paintings of Danilo di Prete, Camargo, and Serpa have much in common with those of the Spaniards, Louis Feito and Antoni Tapies. There is a yeasty, organic quality evident in their earth-toned surfaces which seem in process of growth and decay. This anti-formalistic Spanish strain made a great impression on young Brazilians at the 1959 Bienal and must be reckoned as one of the most significant contributions to recent art. Di Prete’s pictures are a lighter aspect of this Spanish development. He floats forms raised in high relief across his canvas, and the result is a highly subjective form of nature painting.

The pictures of Frans Krajcberg also relate to this nature group, and his work has been termed “sculpture-painting.” Their rich, convoluted surfaces are built up of painted Japanese paper adhered to a support and modeled in relief. In these perforated, creviced vistas, Krajcberg creates elementary microcosms that suggest volcanic eruptions and constant metamorphoses of terrestrial surfaces. Brazil’s sculpture is not yet as developed as her painting and graphics.

In Bahia, Mario Cravo is in the very midst of the persistent Brazilian Negro tradition and the imposing ruins of Portugal’s colonial epoch. His earliest pieces are rather literal improvisations on these native forms and also show the influence of such international figures as Calder and Lipchitz whose work affected young Brazilians with such force during the ten years of the Bienal.

Self-taught for many years; studied in Paris on scholarship from French Government, 1951-1953. Studied at Atelier 17 of S. W. Hayter and at the École du Louvre. Came to the United States under Department of State exchange program to lecture at School of Art of Philadelphia Museum, 1956.